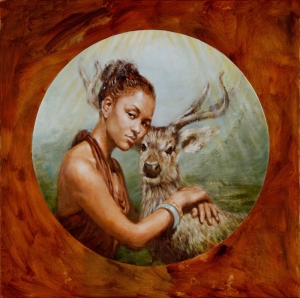 Only one mounted specimen is known to be in existence, at the Paris Museum National Histoire Naturelle after living in the zoo there until 1868. Range: Thailand. (Rucervus schomburgki). Oil on linen. 33″ x 33″.

As a painter and devotee of museums, I had an artistic epiphany of sorts. While in the depths of the American Museum of Natural History in New York I was suddenly stopped cold by the sight of an animal I had never seen before. There, in a dusty 80-year-old display case was an astonishing half kangaroo- half-wolf animal, obviously a ferocious predator with magnificent tiger strips and a strange prehensile tail {Thylacinus cynocephalus} the Tasmanian Tiger the largest carnivorous marsupial to survive into modern times now extinct from being hunted, last seen in 1938.

After another research trip to New York sketching the wolf from life, I finished a five-foot oil painting – a Tasmanian tiger stopped, on point at the edge of the Australian sea, backlit in the moonlight. In the middle of the painting it dawned on me that there must be other recently extinct animals and birds to research and paint. The project took on a life and direction of its own, somehow bigger than me; and the hunt was on. After research trips to the natural history museums in London, Florence, Leiden, Boston and Paris I am nearing completion of a series of large format paintings of recently extinct animals and birds, painted to life-size. All of these extinctions were due directly to collapsing ecosystems and/or over- hunting.

The enormous contradiction between ecological catastrophe, species extinction and beauty points to the extraordinary immensity of life. Rachel with Schomburgk’s Deer is the most recent in the series.